The Essential Defence Services Act 2021 (EDSA-2021) has lapsed and has become defunct on August 11, 2022. The writ petition challenging the constitutional validity of the EDSA – 2021 filed by the AIDEF at Delhi High Court is still pending. www.indianpsu.com has come to know from reliable sources that the Federations of Defence Civilian Employees are planning for a strike in the Ordnance Factories against the various unilateral decisions taken by the DDP and also the Corporations.

To ascertain the facts, www.indianpsu.com contacted C. Srikumar, General Secretary of the AIDEF and he confirmed that they are considering for a strike action and the issue is already under discussion between AIDEF and BPMS. Attack on the employees of Ordnance Factories is increasing day by day.

All the assurances given by the Government with regard to the service matters of the employees and ensuring sufficient workload for the 41 Ordnance Factories is
being totally violated. In this situation a meeting of the senior leaders of AIDEF, BPMS and CDRA was held through video conference on 04-09-2022 and an unanimous resolution was adopted in the meeting condemning the unilateral, insensitive and unhelpful attitude of the DDP and the Corporations.

The resolution also says that they will be observing a one week protest programme in support of their demands such as withdrawal of Corporatization, allowing the employees to remain as Government employees till their retirement, to withdraw NPS and settle all demands and also to constitute IR mechanism in accordance with the provisions of Trade Union Act and Industrial Dispute Act. The relevant portions of the resolution is published here for the benefit of our viewers.

The meeting expressed its displeasure, dissatisfaction and anguish about the total negative attitude of the DDP authorities in settling the issues represented by the AIDEF, BPMS & CDRA. The CMDs are taking unilateral decisions in constitution of the IR/Consultative Machinery, changing of the service condition of the employees, such as increasing the working hours in violation of the Cabinet decision and the commitment given before the Hon’ble High Courts, rejecting the compassionate ground transfer applications given by the employees and transferring the employees in a vindictive manner etc., it is a matter of serious concern that even in the official meetings conducted by the DDP, the authorities are not conducting the meetings in a congenial manner and there is no positive approach to settle the outstanding issues and demands of the employees.

The meeting also noted with concern that despite the assurance given by the Hon’ble Defence Minister, no steps are being taken either by the DDP or the CMDs for fully utilising the available manpower and infrastructure by providing sufficient workload to all the 41 Ordnance Factories. The Ordnance Factories under TCL, YIL, AWEIL, IOL will not be having full-fledged workload for the next financial year i.e. 2023-24.

The situation has become so worse in the Ordnance Factories, even the Officers Association (IOFSOA) is forced to lodge so many complaints against the functioning style of the CMDs of the Corporations.

Considering all the above issues the meeting decided to fight back against the indifferent attitude of the DDP and the Corporations. AIDEF & BPMS proposed for a strike action in the near future in case the issues are not settled by the DDP and the CMDs. Therefore the meeting has unanimously decided to observe one week protest programme from 31/10/2022 to 04/11/2022 in all the Ordnance Factories by the Affiliated Unions of AIDEF, BPMS and the Affiliates of CDRA in the following manner.

The meeting calls upon the Defence Civilian Employees of all the 41 Ordnance Factories to remain united and to fight back relentlessly till the Government withdraw Corporatization and allow the employees to remain as Government Employees till their superannuation from service and also to realise all the outstanding issues represented by AIDEF, BPMS & CDRA.

The meeting urges upon the Government of India instead of behaving in a insensitive manner towards the employees of Ordnance Factories who are subjected unnecessary hardship due to the Corporatization decision taken by the Government, should come forward with a pro-employee approach to settle all the outstanding issues. 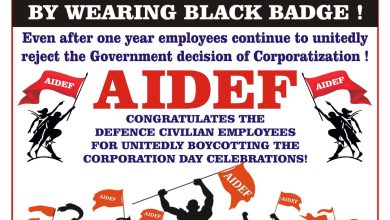 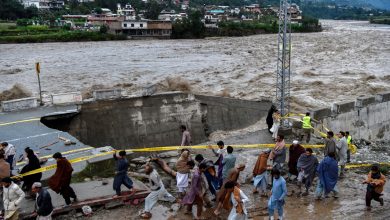